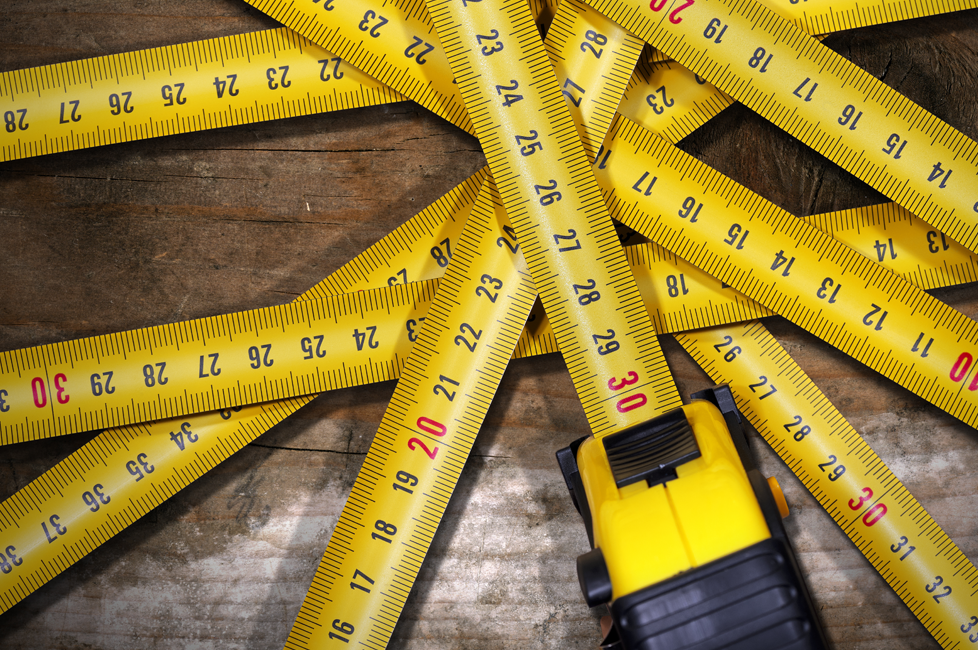 Measuring is an everyday task for all of us, whether we’re making something, preparing a tasty meal, or checking to see if we have time to cross the road before the light goes red for us. That’s why, today, we have some measuring tips for you.

Generally, when it comes to measuring pieces to be cut for a project or some home-maintenance task, we’re looking at levels, depth, height or length, areas and volumes.

We’re going to cover some of those areas here, but first some points. 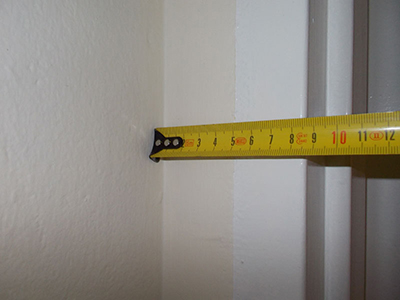 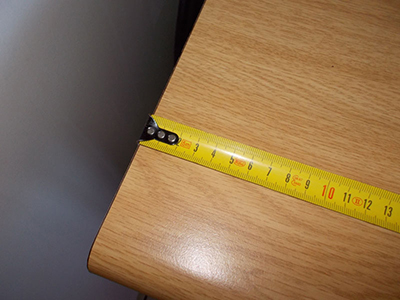 Some people look at the angled piece of metal on the end of a steel tape measure and, because it moved, they think the measure is faulty. It isn’t; it’s designed to move.

When measuring an inner surface, such as the distance between a corner and a door jamb, the hook when pushed against the corner moves in about 1mm (the distance depends on the thickness of the metal used for the hook), accounting for that thickness.

When measuring an outer dimension, say to the end of a countertop, the hook is pulled out, to a precise position and then stopped by its attachment rivets.

This ensures an accurate result whether measuring an inner or outer dimension.

This one’s on the level

Here’s a quick and simple substitute for those situations where absolute accuracy is not critical and you don’t have a spirit level, or you can’t find it.

Take a parallel-sided bottle like the one shown and if it is empty, fill it to about halfway with water. (To be really crafty and to make the water more visible, a little cordial will give it colour for better visibility.) Replace the cap and place the bottle on its side on the surface to be levelled (ensuring that it cannot roll off and break) and turn it until the edge of the label is clearly visible. Now lift or lower one end of the surface until the water’s meniscus is exactly on the edge of the label. You have levelled the surface. 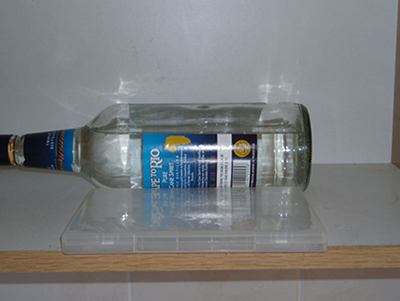 Be a jughead – on the level

A measuring jug from the kitchen can also be used to act as a substitute level. Fill it with water to one of the lines, and place it on the surface to be levelled. When the meniscus lies on the line, the surface is level. Turn the jug through 90°, and you can check it in the other plane as well. Be a jughead – on the up and up 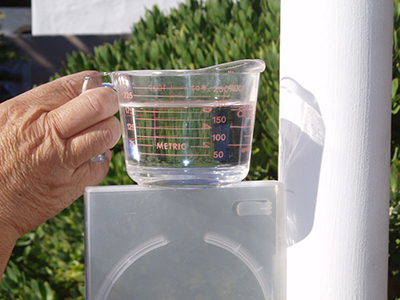 You are sometimes faced with the problem of having to measure from a point that is out of reach. The solution is simple: take two lengths of timber and move one up until it reaches the point at which you need to start measuring. Then move the second timber down until it reaches the lower point. Clamp the pieces together firmly. You can now measure the total distance from end to end, and you have the measurement you need. 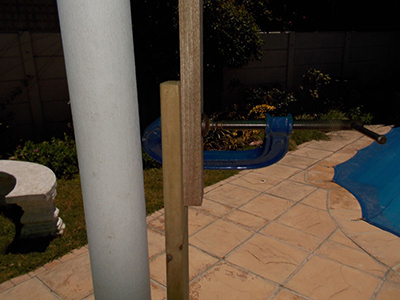 When measuring over an obstacle

You might have to measure the distance over an irregular obstacle at some stage. In this case it’s a rockery, but it could be a hedge or bush and you cannot shove a tape measure through it. The trick is to use two lengths of timber, but now they are positioned in a ‘V’ form. Place one ‘foot’ on the far side of the rockery at the edge of the rocks, and the other on the near side against the rocks. Lift the contraption off, and measure the distance between the ‘feet’ – and that is thickness of your rockery. 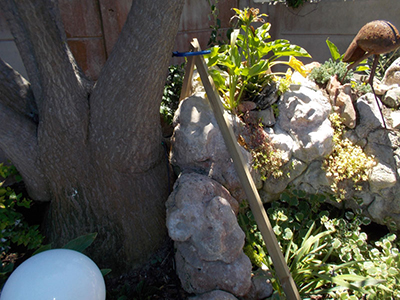 Marking up, laying out and measuring – finding centre

There are two methods to finding the centre of a circular sheet of wood or metal.

First, let’s look at finding the centre of a dowel, curtain rail, etc. Place the work piece between two lengths of timber with their ends cut precisely at 90° and then place a steel rule between the two – so that you have established the diameter of the work piece. Position a carpenter’s square at the midpoint and draw a line across the work piece surface. Now rotate the work piece 90° and repeat where the lines intersect is the centre.

In the case of larger pieces, use a large square protractor and draw a line at around the centre of the work piece. Rotate it and repeat, and again, where the lines intersect will be the centre.

In both cases, you can rotate the work piece 60°, rather than 90°, and then draw three lines. If you have been accurate (and the dowel or curtain rod is perfectly round, the three lines should meet at the same point. If they meet slightly off, resulting in what is called a ‘cocked hat’, then the centre of the ‘cocked hat’ will be very close to the actual centre. 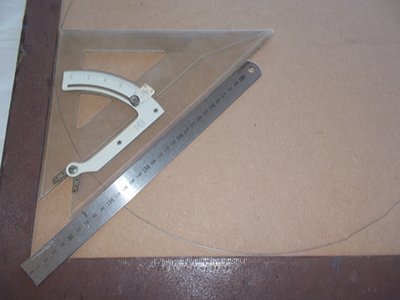 For most woodwork and metalwork projects, a carpenter’s square is perfectly adequate when you want something to be exactly 90° in relation to something else.

Out in the garden, it’s a different story, but just as easy.

All you need do is use good old Pythagoras… well, his theory, anyway… it states that the square of the hypotenuse (the side opposite the right angle) is equal to the sum of the squares of the other two sides and it can be written in one short equation:

It allows you to mark off precise right angles over long distances. To ensure, for instance, that your new driveway will meet the garage at exactly 90°, measure across the garage from side to side… measure 3m across the front, and 4m out to the road. With a helper holding the end of the tape at the end of the 3m point, and another holding a second tape where the 3m and 4m meet, move the end of the tape, at the 5m point until it meets the first tape at the 4m point. You now have a perfect right angle. You can also use this method for ‘odd’ lengths. Let’s say one is 3.5m (3.5² = 12.25) and the second is 5.8m (5.82 = 33.64). Adding the two makes 45.89. Now all you do is find the square root of 45.89 on your calculator, which is 6.774. Hence, the length of the longest side opposite the right angle will be 6.774m.

Get those legs properly spaced

Making a pedestal table and need to ensure the three legs are perfectly equidistant from each other? Simple!

Marking equidistant points on an odd-measure

You sometimes have to divide a work piece into ‘X’ number of pieces, and working it out can be a mission. Here the solution.

An ordinary nut and bolt makes a handy, accurate way of measuring the depth of a hole. Turn the nut up the bolt, place the end of the latter in the hole, and turn the nut down until it reaches the surface. Simple!

But is it square?

Make sure that frame or drawer is absolutely square – measure diagonally from corner to corner – if the readings are the same, the item is square. To end… something for very accurate measurements

A Vernier calliper is an instrument used for making very precise measurements. In this case, down to 0.002mm.

In the picture, the jaws are used to measure thickness are the lower ones – as you can see, this hair is just 0.004mm in diameter (as you can see on the dial).

More commonly, these jaws are used to measure outer dimensions, such as drill bit diameters, tube diameters and so on.

The upper jaws are used to measure inner dimensions, such as the inner diameter of a pipe or tube.

The Vernier calliper also has a central stem that slides in the body of the instrument and this is used to measure depth – here being used to measure the depth of a lock body on a security gate. The depth is measured off the Vernier scale and the dial, and in this case is 6.002mm.

Also available from Mica are laser measures. They are highly accurate and can be programmed to instantly measure distance, area and volume. Caution: NEVER point one at anyone or look into the laser. Doing so could cause serious damage to the eye and even lead to blindness.

These materials are available at selected Mica Stores. To find out which Mica is nearest to you and whether or not they stock the items required, please go to www.mica.co.za, find your store and call them. If your local Mica does not stock exactly what you need, they will be able to order it for you or suggest an alternative product or a reputable source.